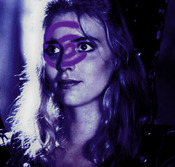 Israfil is a Priest and Inquisitor for Pharasma. Her face is graced with the birthmark in the shape of Pharasma's symbol. Her platinum white hair frames her face and is braided back, ready for battle. Her violet eyes flare in anger at the sight of the undead and her violet-charcoal skin hosts many battle scars from her life of hunting. Pharasma's avatar has told her she had Drow heritage. She holds her religious tasks very close to her heart. She wants to make sure the abominations do not hamper mortal life, since she knows that Pharasma hates the undead. She was raised in a Spartan style monastery of Pharasman priests who were tasked with creating a sacred group of undead hunters, called the 24, and later released without a path to follow. She feels she has to atone for her part in misplaced justice. She has never had friends, until recently... only brothers and sisters of the 24 who hunted the monsters with her. She is now learning how to deal with those who do not have her austere outlooks and those who do not have black and white viewpoints.
Nara's Words 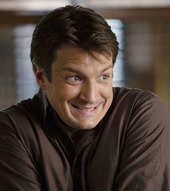 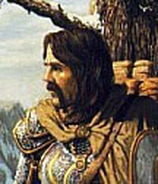